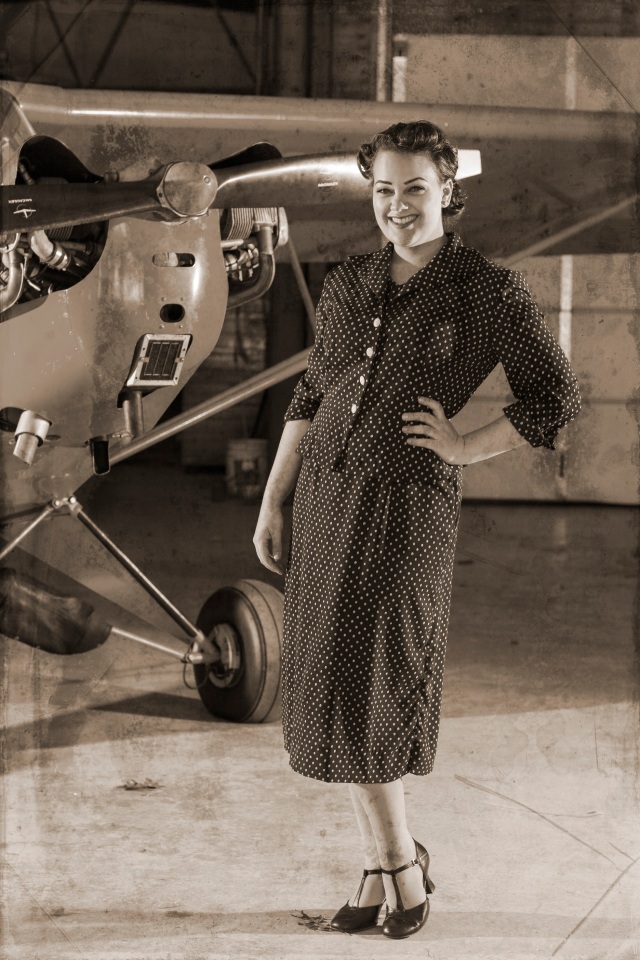 Q – Before you started working on this production, what was your perspective on the role of women during WWII?

Before working on this production, my perspective of women during WWII was very ‘Rosie the Riveter’ inspired. I pictured women who went to work, filling positions that the men had left open. Then returning home and still being mothers to their children. I pictured nurses and factory workers. I pictured women doing it all – working and raising families and supporting their men overseas.

Q – What kind of job do you think you would have had during WWII?

I think I would have been part of the war effort – to have actually been on a base and fighting alongside the men the best that I could (and however I was allowed to). Maybe as a nurse? Granted I could also see myself taking over the job that was previously held by a man – leading factory workers or building planes and weapons. However, the more involved I get in this production, the more my answer becomes that I would have been a WASP. If I’m ever asked this question in the future, that will be my answer. These women were absolutely incredible, brave, intelligent, and passionate – they were (and are) amazing.

Q – What or who do you draw on for inspiration for your role?

The character description for Alice Hawkins is ‘Late 20s. The cool intellect.’ That’s not a whole lot to work with. However, after the reading the script, I felt connected to her almost immediately. My inspiration for Alice comes from a few different places. From my own life, she’s a little bit my Aunt – part intelligent, put together, working woman and part poker playing bad ass who likes to drink wine and hang out with her girls. That balance is such a fun one to play! Other inspirations for Alice come from me playing with the way she walks and talks and sort of settling into what feels right. I had an acting teacher in NYC who said that picking an animal for your character and seeing how they move can inform some awesome character choices. I’ve been playing with Alice being a cat. She’s logical and every move she makes is well thought out beforehand. But she’s also quick to jump to the rescue when her friends and family need it.

Q – What woman in your life influences you the most and why?

My mother, absolutely. My mom is a fantastic woman, and that is an extreme understatement. She is intelligent, kind, caring, compassionate, beautiful, and talented. She is a fabulous mother and a very successful businesswoman. She taught me to work hard and to be loyal, to be kind but also aware of my surroundings, to place more value on my intelligence than on my looks, to hold the door for the next person, and to buy coffee for soldiers and veterans. She has always supported me in every endeavor – she’s my biggest fan. She taught me that being there for others and supporting people’s hopes and dreams, no matter what they may be, is sometimes the most important thing you can do. My mother and I fought a lot when I was younger, and as I get older I see it is because we are so much alike. When people call me “little Patty” I take it as the highest compliment. She is without a doubt the most influential woman in my life!

Q – What do you hope our audience gains from seeing Decision Height?

I hope the audience gets to see how much these women put into being WASP. They jumped at the chance to be pilots and so many of them never saw recognition for their work. These women were an enormous part of the war effort and partially because of them, we have our freedom today. I hope we can show our audiences not only the work these women put in but also how they were real people. I want our audiences to be able to identify with at least one of us up there on the stage and think, “If I was one of these characters, that’s who I’d be. If I was in this situation, that is how I would have reacted.” I hope they can feel as emotionally connected to these women and their stories as I have become.

Decision Height will be at the Players’ Ring  May 6 – 22, get your tickets now!